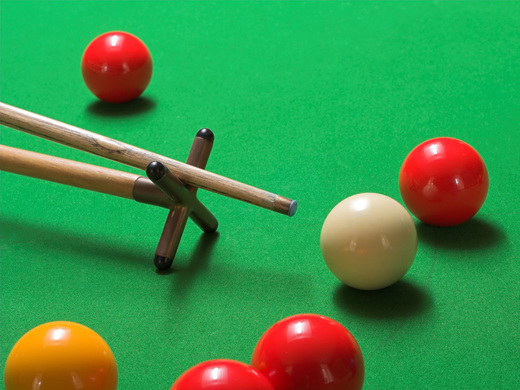 St Olaves get off the mark

There’s no change at the top after week 4 of the Mac’s Builders Merchants Snooker League as joint leaders Finch Hill Mob and Finch Hill Musicians stayed unbeaten with away wins.

An overdue first win for the current champions who condemned Wannabes to their twelfth loss in a row. Apart from the final frame, St Olaves were chasing some hefty handicaps. Paul Smyth reports:

Dave Kelly 68-66 Steve Cowin, Kelly started well, Cowin tried to stay with it with some individual pots but Kelly just did enough to take the win on the black. Paul Smyth 93-80 Paul McKinstry, Smyth got the pack opened, then in a moment of confusion, (senior moment), potted a red after potting a red, therefore foul. McKinstry made a good fight of it but Smyth with a 22 break, then a few high colours took the frame. Darrell Thacker 57-85 David Callister, Thacker closed in, but each time Callister, making his first appearance for Wannabes would pot and increase the gap again. The frame continued like this until a few choice pots on the colours sealed it for the DSB man. James Kerr 85-75 Fred Corris, Kerr started well in his quest to catch Corris with a few pots but Corris fought back with some excellent long ones. A good battle ensued until Kerr eked out a nice 24 break to close the gap, then pushed on for the frame. Adam Blake 49-5 Dave Corris, here Blake continued his winning debut streak. Some nice pots early on to extend his lead to around 20. Luck wasn't running Corris’ way, who left a few easy options helping Blake push ahead for a win. St Olaves beat Wannabes for at least the eleventh time in a row, my records don’t go back any further!

Reprobates continue their good start to the season. Ashley Howard 78-90 Ste MacDonald took over an hour for MacDonald to grind out a fine comeback after conceding a 49 start. Chris Killey 36-46 Mikey Booth was another good win for Booth who is yet to taste defeat. Rob Callister 58-57 Simon Gardner, according to my correspondent, (S Gardner), Callister had four flukes and benefitted from his opponent going in off the black, oh dear. Paul Tangeman 66-54 Adam Dooley, apparently Dooley despite a 20 break didn’t have much run his way whilst having to chase a 42 start. The decider between unbeaten Rhys Moore, receiving a 63 start and Zain Abideen saw the latter produce one of his best performances in defeat. Abideen got two of the four snookers required but it was too much of a chase and Moore finished it off with a great pink, 97-53.

Peel go level third with Reprobates after a good performance and first win at the Cue Zone. Lee Gale 20-59 Don Humphries, two teen breaks from Humphries were enough with Gale not quite firing. Paul Kell 21-53 Barton Beaumont, Beaumont was potting better than last week and combined with his safety game pulled away after a bright start from Kell. Despite numerous snookers from Kell, Beaumont escaped from most and the frame was his after potting the brown. Alex Sinclair 51-40 Mike Crook, a rare 20 break from Crook put him in control but a strong finish from Sinclair on the colours won the day, as Crook blew two gettable efforts on the black. Kam Virk 44-59 Geoff Hall was a good watch, Virk started very well, knocking them in from everywhere and surged 28 ahead. Once Hall had finished his pies and wiped the barbecue sauce off his hands he became more concentrated on the job in hand. A 20 break soon followed and the frame turned on its head and he just squeezed home on the pink. Tony Dhadwal 18-61 John Kelly, this frame ground to a halt with 3 reds left and Kelly a dozen or so ahead, before Kelly finished it off well after taking advantage of a rather fortuitous snooker, angling Dhadwal in the jaws of a corner bag. Jacksons still searching for a first win.

PSM also remain winless as Terry Boyle reports: Marc Morley 37-65 Scott Campion, this was nip and tuck but fair to say Campion got the run of balls. Phil Joynes 55-45 Jez Hill, both players potted well, Joynes was ahead on the colours but played a loose shot on the brown, Hill took brown and blue, and both had a few goes on the pink before Joynes secured the frame. Dave Pickersgill 26-55 Martin Rigg, Rigg who was outstanding only missed one pot and was an easy winner. Ian Brookfield 73-82 Calum Gardner, was the best frame of the night with Brookfield on his first appearance in four years holding on to his start. Down to the colours he had a 16 point lead with 18 on when Gardner got a good snooker on the blue, and took the last three colours to win. The final frame ended Mike Boyle 74-41 Darryl Hill. Boyle, (24 break) enjoying his 28 start and just managing to keep his nose in front until Hill, (25 break) conceded on the brown.

The Mob had a long winning streak playing at Malew but it looked unlikely to continue after Alec Oates 81-49 Peter Kirkham, (Oates 20 break) and Tony Pring 77-40 Peter Crellin had put the home team two up. Finn’s unlikely win in frame three kept the Mob’s hopes alive, requiring two snookers on the pink and black he somehow got them to win, James Goodwin 75-80 Steve Finnegan. Finn also had a 21 break. More breaks including the best of the week, 30 and 21 from Tom Miller levelled the match with frame four ending Mark Quinn 53-80 Miller, before Steve Oates completed the comeback, beating David Quayle 62-88 Oates.

These two always produce a close match and this was no exception, Paul Smith reports:

Jamie Wilson 55-57 Trevor Peace, Wilson made immediate inroads into the 35 start with a fine 28 break continuing his form from the weekend. Peace slowed him down after that though and both played some excellent safety with Peace managing to keep his nose in front. Wilson needed all the colours from brown and preceded to pot brown, blue and pink but surprisingly missed the black while using the rest. Another bout of safety followed before Peace fluked the black with a triple into the right hand black pocket. Gary Conwell 62-40 Mike Doherty, 35 seemed a big start to give Doc as Conwell hadn’t picked up his cue since the final of the Wakefield cup. But with Doc missing chances and Conwell potting some good reds and colours he was level with two reds still left on the table. A fluked blue for Conwell meant Doc needed a snooker and Conwell potted the pink soon after. Stuart Littlewood 41-58 Vic Rigby, another frame where a 28 start seemed like a lot to give, especially to a wily player like Vic and so it proved to be. Stewie was behind all the way and never looked like catching Vic, but a late rally on the colours and the winning post looked in sight for Stewie. However, a poor effort on the pink left a straightforward pot for Vic to keep his unbeaten record intact. Chris Dagnall 60-74 Matthew Dodd, another big start to give here to a player, (Dodd) that can at times pot them off the lampshades, sometimes using multiple cushions! Dagsy never threatened and Doddsy with some good balls and missing some fairly easy ones extended his 49 start. Somehow, Dagsy got back into it and needed all the colours to tie on the black. He got down to the pink but left a mid range pot that Doddsy slotted in like it was a gimme, much to Dagsy’s chagrin. Doddsy on the verge of yet another handicap cut? Paul Smith 69-55 Dave Hanlon, continuing the theme on the starts, Smith was giving away 42 here. Whilst there were no breaks from Smith he quickly closed the gap to just over 20 with a lot of reds left on. Keeping Hanlon in the long grass he was able to pot reds and not worry about having to take high value colours. However, Hanlon managed to pot some reds and colours in the second half of the frame and it was nip and tuck going to the colours. Smith laid on a couple of snookers that had Hanlon scratching his head and produced a couple of fouls. After potting, brown, blue and pink Smith ran out the winner. All close frames, but well done to Vinnie’s bandits.

Thanks to all contributors.