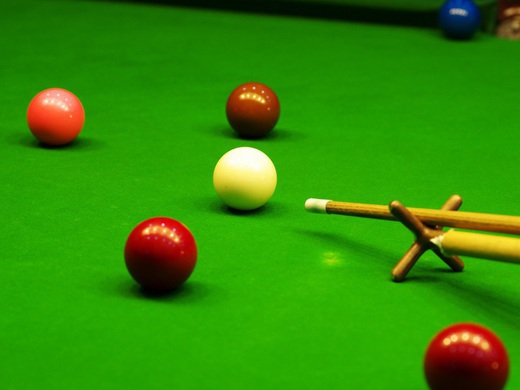 Week 3 of the Mac’s Builders Merchants Snooker League produced a clash between the previous and current titleholders, Newbys and St Olaves. Meanwhile 4-1 wins for Finch Hill Mob and Finch Hill Musicians left them heading the league and the only unbeaten teams.

A third consecutive 3-2 loss for the champions and the first time they’ve lost three in a row for two and a half seasons. Johnny Myers 74-7 Paul Smyth saw Myers, who only registered 5 points last week take it out on Smyth. Then Mikey Booth stayed unbeaten winning 42-12 over Dave Kelly making it 2-0 to the home team. St Olaves blooded another new player in the next with Anthony Bayle and he played well win, Ste MacDonald 41-71 Bayle. Last season’s individual league winner Darrell Thacker was back this week and forced a decider by taking frame four Adam Dooley 29-66 Thacker. Zain Abideen was too strong in the last winning 65-28 against James Kerr.

Wannabes duly notched up their eleventh defeat on the run, though to be fair seven of these have been by a single frame. John Spellman reports, Harry Minor 67-41 Marc Bolton, both played tentatively with Bolton giving away a few fouls (totalling 31 points over the match) ! Minor showed good safety play with solid ball potting and was ahead throughout. Bolton battled valiantly but Minor majored on the day. Steve Cowin 52-88 Simon Corrin, a good game with both players showing skill with a modicum of good fortune each. Played at pace, the battle of the Manxies was good to watch. On his debut Corrin pulled away moving into the colours with a 30 lead as Cowin struggled to navigate some tricky snookers. Dave Corris 52-62 John Spellman, a hardfought match, again with both players showing skill. Corris took his chances early in the game with Spellman rattling a number of long range pots which Corris capitalised on well. With breaks off 14 and 18 Spellman closed the gap with just the black to play. A brilliant effort from Corris saw the black break free from the pocket leaving an easy pot to finish the game in Spellman’s favour. A lucky snooker on the brown by Spellman was the difference between the two players at the end of the day. Paul McKinstry 45-62 Doug Kinrade, Kinrade, starting at 28 in arrears, looked determined from his first shot. Taking his opportunities as they were presented and leaving McKinstry with some awkward shots which he took with equal flair. As the game progressed both struggled to build breaks. Kinrade ran out the eventually winner. Fred Corris 66-36 Jonny Hogg, experienced Corris versus in-form Hogg was bound to be a good match. Corris started strongly taking full advantage of his 28 point head start. Hogg nibbled away at the differential showing great aplomb. However the greater experience of Corris won out in the end as he picked off the colours when they became available.

Blinders big hitters saved the day in the derby match. Martin Rigg 54-26 Kam Virk saw a rather one sided frame as Kam failed to get going and Martin potted strongly with good safety play. Josh Rigg 55-57 Paul Kell went down to the black with Josh having the shot that looked like the winning pot, however he missed it and left it for Paul to step up and level the match. Brandon Forrester 55-71 Mike Reddington, Forrester similarly to Josh Rigg made the start up against Reddington and looked set to win the frame on the brown as he potted it and landed on a thin blue which would require a shot all around the table to finish on the pink. In went the blue only for the white to track around the table for the pink but end up in the corner pocket! After some attempts on the pink by both it was Mike who potted it and 2-1 to Jacksons. The Blinders saved the best until last though as Calum Gardner swept Dave Cavanagh aside with the help of a 35 break, 94-52. Then captain Darryl Hill won the match and scored the highest break of the season so far along the way. With his opponent, Tony Dhadwal starting on 70, Dhadwal added to that early on with one red, however that was to be his only pot as Hill knocked in a mid range red and finished nicely on the black. Some shots later Hill opened the reds and then began picking them off. With some reds in baulk he had to head up the table on 63 and following a pink he landed slightly awkward on a red with Peter Kirkham’s 69 break from week one levelled. In went the red for 70 only to leave him more hampered on a long yellow which was the end of the century attempt. With two reds remaining Dhadwal left a red over the pocket and Hill continued where he left off taking two reds, two colours and cleared up to the pink for a 34 break, finishing on 113 points to Dhadwal’s 71.

The Mob had won their last five meetings at home against PSM and this streak continued. Dave Addinall 59-75 Marc Morley, a 25 break from Addinall wasn’t enough to catch up Morley’s 56 start. Tom Miller 87-56 Phil Joynes, breaks of 40 and 23 from Miller. Peter Crellin 67-58 Matthew Astill and Peter Kirkham 80-72 Terry Boyle were both extremely close going to the pink. Perhaps the Mob’s player of the night was Steve Oates, he produced his highest ever league break, a 26 to beat Mike Boyle 86-40 in the last.

Matthew Dodd reports on the Musicians fine start to the season. First up was Trevor Peace receiving a 7 start against Mark Quinn. Peace potted really well with Postie knocking a few nice ones too. Peace took it on the colours after some good safety play and some hard luck with Quinn going in off a few times, Peace 73-41 Quinn. Mike Doherty 52-48 David Quayle, this one only went Doc’s way after he took the final pink straight into a top pocket and potted and a very good black, cut all the way into bottom pocket. Quayle perhaps a bit unlucky, being in the frame throughout with some decent pots himself. Vinny Dale 71-57 Alec Oates, Dale played well and his safety game kept him ahead and was 26 up with 22 on when he fouled. Oates looked to be taking it to a re-spot as he potted the brown, blue and pink but he missed the black which a relieved Dale took. Matthew Dodd 59-32 Jimmy Goodwin, these two recently met at the backend of last season and it went Dodd’s way again. Very low scoring early on with the reds all down one side and the colours another. Eventually Dodd got going to overhaul the 14 start. Dave Hanlon 53-57 Tony Pring, the latter was potting from all kinds of angles though this didn’t impress one of his team who was spotted asleep. With Pring ahead, Hanlon's good all round game took it to the black. Hanlon went for a cut into the bottom pocket but left it for Pring and the whitewash was avoided.

Peel tasted their first defeat but did start strongly with Don Humphries 62-19 Rob Callister. Humphries was striking the ball well and Callister was a bit under par. The second of two unforced fouls from Callister let his opponent in to deliver a second teen break to seal the frame. Barton Beaumont 14-45 Paul Tangeman, Beaumont couldn’t find many pots to go with some decent safety. Tangeman edged away steadily with a few nice mid range efforts. Mike Crook 63-80 Ashley Howard, Howard tucked into the chances on offer but Crook fought back from 50 behind and snookers required. He potted the final blue to go five behind but in the process snooker himself on the pink and then give six points back. Ultimately Howard’s double attempt on the pink turned into a winning quadruple as the knuckle of the middle bag straightened the ball into the opposite pocket. John Kelly 57-45 Chris Killey, both exchanged double figure breaks early on before things got a bit nervy. Killey potted a very nice long red and later an excellent pink, corner to corner with difficult cueing off the cushion. Kelly, who was far from his best did string brown, blue and pink balls nicely to force a decider. Geoff Hall 45-74 Rhys Moore, Peels anchorman couldn’t quite pull this one back. Starting 49 behind Hall potted plenty but not the high colours he really needed. Moore on the other hand had his moments too and showed he can pot a ball or two given the chance. As Moore tucked away the final brown Hall need the last three colours for a respot black. Sadly for Hall his long blue effort into the green bag rattled and crept across the top cushion to hang over the yellow bag. Moore rolled it in but the cueball very nearly dropped into a middle bag amid a few gasps. He then slotted away an excellent pink up the side cushion to deny the chance of any snookers.

Thanks as always to all contributors.