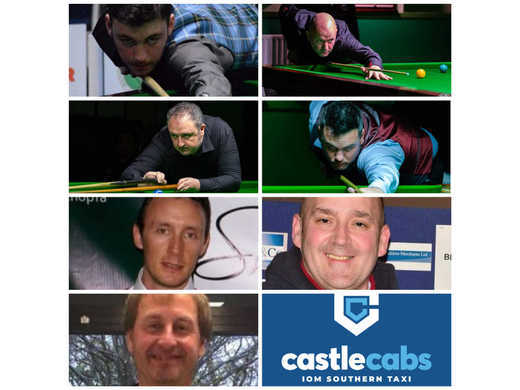 It's been a while since we've introduced a new event and we're all really excited to be launching one of our biggest yet! As we welcome brand new sponsor to the association - Castle Cabs - Isle of Man we will be staging a premier league consisting of seven players. Played on the Cue Zone's Star table all seven players will play each other once with two matches per week held on a Saturday afternoon with Week 1 commencing on January 16th. We have seven of the islands very best players ready to go head to head week in week out until the end of March where the top four players will then contest the play-offs. Matches in the league phase will be played over six frames with all six frames played and players will receive 3 points for a win, 1 for a draw and 0 for a loss. The winner of each match will receive £10 and in the event of a draw both players will receive £5. In addition £5 will also be awarded to the player with the highest break in each match. Following the league phase the top four players will contest the best of nine semi finals on April 3rd with the losers receiving an additional £40 and the best of eleven final will be played on April 4th with the runner up receiving an additional £80 and the winner £130. The player with highest break of the play off weekend will receive £20. All matches will have a 25 second shot clock in use. We can now confirm the line up with the seven players consisting of the four semi finalists from last year's Island Championship and the three other lowest handicapped players to accept their place meaning the line up is as follows:
Darryl Hill
John Kennish
Sean Corkish
Peter Crellin
Peter Kirkham
Tom Miller
Paul Smith
We'll be confirming the fixtures shortly and building the event on the league republic page - all matches will be live streamed to this page. This should be an excellent event which we're all really excited for and it should be good to see the event being played each week and we thank Castle Cabs for the sponsorship of the tournament and the Cue Zone for providing the table for every match.