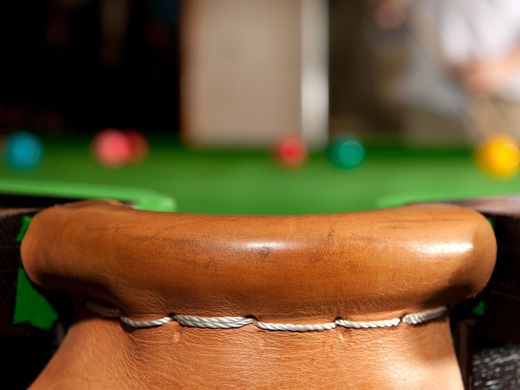 In the clash of the last two years champions, it was the 2019 winners who came out on top. The opener was a good quality battle between Pete Kirkham and Zain Abideen with not many missed chances. Kirkham with a 21 break and Abideen had a great 38 break but missed a fairly straight forward black attempting to land on the yellow with just the colours remaining, and very nearly lost it before winning 70-83 on the black. Dave Addinall was up to his usual tricks in the next versus my correspondent Simon Gardner with an early 27 break. Gardner, who only got four visits with his 70 start was still 28-81 ahead when Addinall then made a great 69 clearance! Both his breaks were without a black as it was nicely stuck on the side cushion. Steve Finnegan played well and kept it tight against Ste MacDonald to win 65-26. Steven Oates for the Mob was ahead all the way until Johnny Myers took it 46-50 on the black. An in form Lee Hunt protected his 35 start very well in the decider and despite an unlucky Callum Gardner’s 35 break, Hunt sealed the Mob’s win 71-56.

Frame one started well, Don Humphries for Peel potting an unbelievable long red with his first shot, dead-weight from tight under the cushion, but missed a tricky black. He then followed it up with a couple more good pots to extend his 14 point start, but Dollin Mercer found two breaks in the teens to go ahead. Humphries struggled a bit thereafter and looked out of sorts and Mercer built a lead with isolated reds and colours. With Humphries needing snookers Mercer fluked the final green before potting brown and blue to bring the concession at 70-28. Frame two saw young Peel debutant Barton Beaumont have a rough first league outing against Brendan Clague. A combination of giving away a 14 point start, some good mid-range potting from Clague and some awful luck for Beaumont meant the scoreline didn't really do him justice. 62-3 it ended, when Beaumont conceded before the colours. In frame 3, Rob Callister looks to be finding some real form again after coming out of league retirement. The Onchan MHK potted well, including a couple of stylish long reds down the cushions and played some good percentage snooker to keep Jim Caley at bay. Caley forced it to the colours but it ended 70-37 in Callister’s favour. Paul Tangeman is the Reprobates' form player this season, though. After two convincing wins in his last three outings, he produced another assured display to make it 4-0 winning 76-55 against Geoff Hall and probably a handicap reduction if he wins either of his next two matches. Hall needing a snooker on the blue got plenty but Tangeman kept escaping and finally Hall accidentally potted the blue and conceded. Finally, John Kelly firmly dashed any hopes of a whitewash. He quickly reduced Will Duquemin's 14 point start and never looked back. Duquemin managed just two reds in the frame, with Kelly amassing 61 points before the handshake came at 16-61. Thanks to Dollin Mercer.

Both teams were unbeaten going into this so perhaps this wasn’t the expected result. Details from Paul Smyth. Frame 1 was Alec Oates v Dave Kelly. Kelly started well with a few pots but missed too many colours. Oates grew into the frame with some nice pots and good safety, took the lead and pressed on from there. Kelly fought back then until they both needed pink and black. Pink near corner pocket, Kelly tried to clip it thin for a safety, but missed giving away 6, and leaving an easy pink for the win 65-53. David Quayle received a massive 98 start in the next against Sean Corkish who started well but couldn’t keep the small breaks going. Quayle then potted some important balls and Corkish was soon needing snookers. With the frame effectively over, Corkish played for a break for the break league, but Quayle potted a few of the early colours drawing the handshake at 122-57. Debutant Dave Annakin and Paul Smyth were next and had a good battling frame and with Smyth clawing back the handicap it was all square on the pink. Smyth fouled when missing a thin edge and after 5 minutes a safety it was Annakin who potted a difficult cut pink long distance into the yellow pocket to win 68-56. Frame 4 had James Goodwin coming out potting with a couple of small breaks extending his lead, to which Darrell Thacker didn't recover. With the help of the run of the balls, Goodwin pushed ahead and took a comfortable 93-38 win. Mark ‘Postie’ Quinn and James Kerr were up last in a good frame by botb players. Kerr closed in on Quinn’s start and with both needing the final black. Three shots into the safety battle, Postie delivered the coup de grace trying a 3 cushion safety shot, he fluked the black into the corner to take the win 69-62 and Quinn stays unbeaten. Malew’s second 5-0 win of a fine early season.

Still no win for PSM but at least they did take this match all the way. Lee Gale took the first for the visitors despite his cut handicap, good potting and positional play seeing him to a 27-53 win over Marc Morley. Sean Roberts couldn’t make any inroads into Kam Virk’s 35 start, and Virk with a teen break put up his best display of the season to take his first ever league win 31-81. PSM then hit back in fine style, Terry Boyle and Phil Joynes both with convincing wins, 77-32 and 65-15 over Paul Kell and David Cavanagh respectively. Despite the scoreline, Kell played well but Boyle was on fine form and Cavanagh wasn’t left much by Joynes. The decider pitted Mike Boyle, conceding a 49 start against Tony Dhadwal, this was too much for Boyle on one of his occasional league appearances and Dhahwal claimed the match with some fantastic shots according to my correspondent Kam Virk, 30-74. Another great win for Jacksons.

The Musicians were slightly more in tune after failing to register a win last week as John Kennish reports. John Kennish 97-89 Paul McKinstry. McKinstry started well with some good pots and was unfortunate on one occasion to leave himself hampered on the pink. A couple of fouls by McKinstry on the pink and black gifted Kennish 13 points which proved to be crucial. Kennish managed to get in the balls to make a 40 break and a decent clearance from the yellow sealed the frame on the black. Peter Collister 104-70 Steve Cowin. A potentially difficult match with still ring rusty Collister having to give Cowin a 63 head start. Collister’s steady potting and cautious safety helped closed the gap and he made the frame safe with the help of a 22 break in the middle of the frame and after potting green to blue. Cowin battled on for snookers in what was a very very lengthy tactical frame (80 minutes) from two experienced players. Mike Doherty 64-26 Fred Corris, some good pots from both players with the ever improving Doherty the stronger player on the night, closing the frame out on the colours. Brian Howland 70-53 James Teare, was a bit of a scrappy start with the balls going slightly awkward and not in favour of Howland who was trying to recover a 42 deficit. A great pot from Howland from which he developed the black was a key shot in the match which led to him closing out the match on the colours following a period in which he played some excellent safety shots. Matthew Dodd 44-21 Dave Corris, a scrappy start to this frame which was played off scratch. Dodd was at a disadvantage from the start, having to use a “rack” cue because he forgot his own! Some good individual pots from both players but the position of the colours made it difficult to capitalise. The frame continued in the same vein, then towards the end Dodd shifted up a gear and started potting the kind of balls he has become renowned for. Corris was still in the frame coming down to the blue but was unfortunate to leave it hanging over the middle for Dodd who made no mistake and the sealed the frame with a slightly awkward pink. A first win for the Musicians.

The Rockets built on their big win last week by coming from 0-2 to take this match as Paul Smith reports. Stuart Littlewood 63-25 Graham Ashton was a tight affair with both players potting some good balls but unable to capitalise. Littlewood managed to pull out a 19 point lead by the final brown. He the produced a good mid range pot with what’s becoming a trademark screw shot on to the blue and mopped up the rest of the colours for a 22 clearance and make it 4 from 4. Jamie Wilson 74-46 Matt Radley was nip and tuck in the early stages with both players potting some great balls but not stringing anything together until Wilson knocked in a break of 35 to put him in command. However Radley wasn’t done and continued to close the gap with some excellent potting. Wilson eventually finished the frame on the pink. Paul Smith 34-67 Marek Kenny, the high colours getting tied up early didn’t help Smith chasing 49 from the off. Some fantastic safeties from both players with Kenny playing some great stuff for a younger player. Both had good long pots with no reward and Kenny was 24 points clear on the final yellow. With some fortune he laid an awkward snooker for Smith which left him needing snookers. Kenny kept his cool and ran out a deserving winner. Gary Conwell 46-76 John Spellman, this had an out of sorts Conwell with a big ask chasing unbeaten Spellman’s 35 start. Spellman kept reducing the red count with some of his trademark long potting also picking up some colours along the way. Conwell fought back though and his cueing in the second half of the game was a lot better as he steadily closed the gap with some good pots himself. Unfortunately the damage was already done and John ran out a comfortable winner. Steve Munk 45-72 Doug Kinrade, this saw a belated season debut for Munky and the ring rust soon fell off as he knocked in a 24 break from nowhere. Both players continued some excellent potting with neither one running away with it. A nice touch of sportsmanship from Munky at a crucial time in the frame declaring he’d brushed the black with his hand gave Kinrade a little bit of a cushion and he never looked back. Munky made him sweat a little by going for snookers at the end, but it wasn’t enough to trouble Kinrade and he closed out the frame like the experienced campaigner he is. A case of Hurricanes snatching defeat from the jaws of victory.

Malew, increasing their lead by a further two points are on 17 with the Rockets second on 13 and four teams tied on 10 points. The Rockets entertain Malew next week in a top of the table showdown at Finch Hill.